Honouring Aaron hosted the annual Honouring Aaron Annual Memorial Game in memory of Aaron O’ Flaherty in the Claughan G.A.A grounds on Tuesday, 11 October. Claughan G.A.A, Aaron’s local G.A.A Club played Milford National School, in a fundraiser game – a game of Hurling was played in the first half and a game of Football in the second. 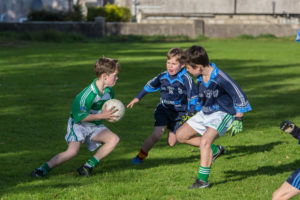 The weather stayed dry for the match, although a cold heavy wind swept across Claughan G.A.A. grounds which made it a tough game for the young players, who still played to the best of their ability in what was a close, tough game that was played in great spirits and good fun.

Honouring Aaron Memorial Match 2016 was a well attended game, supporters were treated to coffee and biscuits at half-time and the winning team on the day was presented with a trophy.